Twenty year old Lais Ribeiro from Miguel Alves in Brazil was discovered in a beauty contest in 2009 and made her international debut at the Fall/Winter 2010 shows where she walked in an impressive 24 shows including Marc Jacobs, Versace, Dolce & Gabbana, Gucci, Givenchy and Christian Dior. Selected as one of the Top Ten newcomers by Models.com, Ribeiro's unique beauty is the result of a melange of races and her stunning physique is awe-inspiring given that she is the mother of a two year old boy named Alexandre.

Ribeiro has been photographed recently by Steven Meisel for American Vogue, Emma Summerton for Vogue Italia and Victor Demarchelier for Vogue Espana. In 2010 Ribeiro was selected to appear in the  annual Victoria's Secret Runway extravaganza and has also been featured in campaigns for Ralph Lauren, American Eagle, J Crew and the GAP. The challenge for Ribeiro's management team at Women Models will be ensuring that this newcomer maintains her high fashion edge whilst also appealing to more commercial end clients.

Posted by Neill Seeto at 8:36 AM No comments: Links to this post

Kate Moss stars on the cover of Emmanuelle Alt's second installment as Editor in Chief at Paris Vogue. The eye grabbing cover shot by Mert Alas & Marcus Piggott, features Moss staring cooly down the lens of the camera as she is being grappled by five hands. The allure and mystical appeal of Moss is as riveting as ever and her captivating beauty is that of a woman who has lived and experienced life to the full. The accompanying editorial showcases the latest haute couture pieces from the likes of Givenchy and Armani Prive and Moss works each luxe look to maximum effect as only she can.

Posted by Neill Seeto at 6:48 AM No comments: Links to this post

Spanish Vogue forecasts a sizzling Summer ahead with an editorial featuring two of my favourite models Arlenis Sosa and Gracie Carvalho. Photographer David Vasiljevic turns up the heat on the beaches of  Brazil with Sosa and Carvalho wearing the season's most figure flattering bathing suits and evening wear. Dominican Republic native Sosa and Carvalho who hails from Brazil, pose amidst a series of props including surfboards and a posse of buffed male talent. Sosa and Carvalho possess a natural beauty and charisma that perfectly encapsulates the feel good vibe of this editorial.

Posted by Neill Seeto at 11:25 AM No comments: Links to this post

Greg Kadel shoots five of modelling's most promising new faces in an editorial for German Vogue. Aymeline Valade, Josephine Skriver, Anais Pouliot, Merethe Hopland and Julia Saner are captured beautifully by Kadel's lens in a series of paired back, black and white portraits. The individual beauty and spirit of each model is perfectly encapsulated, thanks to the minimalist styling by Nicola Knels and Lynn Schmidt.


Posted by Neill Seeto at 3:00 PM No comments: Links to this post

Twenty five year old supermodel Natasha Poly tied the knot over the weekend with her Dutch fiance, business man Peter Bakker. The lavish nuptial celebrations were held over three days at Hotel Byblos in St Tropez with about 200 guests in attendance, including Carine Roitfeld and Peter Dundas. Poly was a picture of elegance in a simple, traditional long sleeved Givenchy gown designed by Riccardo Tisci. The weekend long festivities were capped off by the ceremony followed by a lavish party in which guests were treated to a private performance by British songstress Leona Lewis.
Born in Perm, Russia, Poly began modelling locally in 2000 and has been at the top of the modelling ladder for over a decade. Poly has appeared on the covers of American Vogue as well as the Italian, French, Russian, Australian, and Japanese editions of the magazine. Poly is one of the most bankable names in modelling having landed multiple campaigns for Gucci, Dolce & Gabbana, Louis Vuitton, Roberto Cavalli, Alberta  Ferretti, Blumarine and Missoni. 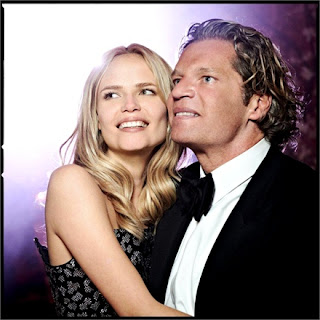 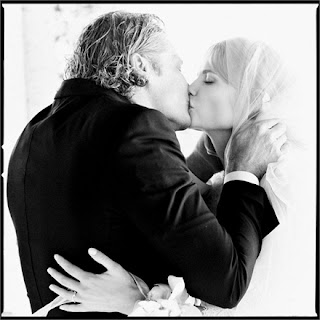 Posted by Neill Seeto at 9:51 PM No comments: Links to this post

Fashion's finest turned out at New York's Indochine restaurant in celebration of American Vogue's creative director Grace Coddington's 70th Birthday. Shalom Harlow, Naomi Campbell, Stella Tenant, Liya Kebede, Caroline Trentini, Isabeli Fontana and Karlie Kloss amongst others paid tribute to Coddington in an evening that was marked by genuine warmth, emotion and camaraderie. Photographer Bruce Weber and Marc Jacobs made heartfelt tributes whilst model Karen Elson serenaded Coddington with a moving rendition of Amazing Grace after recalling how Coddington took her (Elson) into her office as a scraggly seventeen-year-old red head during her early modelling days.


Coddington herself began working as a model for Vogue at the age of seventeen when she won the young model division of a Vogue modelling competition. After a few years of modelling, Coddington began working for British Vogue as a stylist. Coddington spent nineteen years at British Vogue as the Photo Editor before moving onto American Vogue in 1988 joining forces with Anna Wintour in the role of creative director.
As one of the world's most influential fashion editors, Coddington's brilliance lies in her ability to transform photographic spreads into narratives. In an interview with Time Magazine, Coddington surmises, "I like fairy tales, and I like dreaming. I try to weave the reality into the dream. When readers pick up Vogue, I want them to smile. Everything should be a little tongue in cheek, a little dare to-go-there." Editor in Chief of American Vogue Anna Wintour, perhaps sums it up best, "I think of Grace as the heart and soul of the magazine. She is a beacon of excellence."

Posted by Neill Seeto at 3:13 PM No comments: Links to this post

Photographer Christophe Kutner captures the unique bond between mother and child in a series of intimate, black and white portraits for D Magazine. The images of former top models Esther de Jong, Ujwalla Raut, Sunniva Stordahl, Elisabeth Davidsdottir and Janelle Fischman posing alongside their offspring are endearing, unaffected and beautiful in their simplicity. De Jong, Raut, Stordahl et al. look as incredible and as captivatingly beautiful as they did in their former hey days.


Posted by Neill Seeto at 1:17 PM No comments: Links to this post

The lovely and beautiful Tao Okamoto has joined forces with photographer John Paul Pietrus to raise funds for the disaster relief in Japan. Hailing from Japan, Okamoto was in Tokyo at the time of the earthquake and tsunami, and saw first hand the devastating effects of the natural disaster. In an open letter to the general public, Okamoto recounts the fear felt by her fellow country men and women and encourages "friends of the world" to continue in their support of the relief efforts in Japan.
New York based Okamoto has since been searching for a way to contribute to the relief effort and to raise awareness for the long road to recovery for the people of Japan. Okamoto has collaborated with Pietrus to produce a limited edition print run of 100 photographs signed by the photographer and his muse with proceeds going to the Red Cross specifically for the Japan Tsunami Appeal www.redcross.org.uk/japantsunami
Okamoto who is represented by Ford Models in New York, rose to prominence in 2009 when her waist length hair was cut with dramatic effect into a pixie-like bob. Okamoto has appeared in advertising campaigns for Ralph Lauren, Benetton, Kenzo and Uniqlo, and has also featured in editorials for US Vogue, Interview and i-D Magazine. More a muse to designers and photographers alike, Okamoto is fast becoming an iconic model and her efforts to raise awareness for the Japan Tsunami Appeal demonstrate that beauty is indeed more than skin deep.

Posted by Neill Seeto at 7:42 AM No comments: Links to this post