A Sense of Occasion

Many of the most iconic fashion images of all-time, feature models photographed in groupings by the likes of photographers; Richard Avedon, Herb Ritts, Peter Lindbergh, Steven Meisel, Annie Leibovitz, Mario Testino, Patrick Demarchelier and Irving Penn. During the nineties the emergence of the supermodel phenomenon was greatly influenced by the photographs taken of a select group of women who would eventually be referred to as the "Supes." When I think of the term "supermodel", the classic Peter Lindbergh January 1990 British Vogue cover shot of Naomi Campbell, Tatjana Patitz, Linda Evangelista, Cindy Crawford and Christy Turlington instantly springs to mind. More than 20 years have passed since I first laid eyes on this image and still, I am enthralled by its beauty, so much so that I have a print of it framed and taking pride of position in my hallway.
I love analysing the dynamic and composition of various images featuring grouped models. The first thing I look for is the suitability of the selection of models. Do their individual looks compliment each other? Are the models working in unison to achieve that singular shot which encapsulates the photographer's vision? How are the model's bodies positioned in relation to one another and in relation to the image frame. I also look for elegance of the positioning of the model's limbs and the energy which transpires between the model's themselves.
The images featured below are amongst my favourites and all project a momentous sense of occasion. One gets an inkling that there is an acknowledgement of pride and appreciation amongst the models at having been selected as one of the chosen few. I only hope that today's generation of photographers will continue to follow in the ilk of Avedon, Lindbergh et al. by allowing top-tier models the opportunity to shine in equally, beautifully composed group portraits. 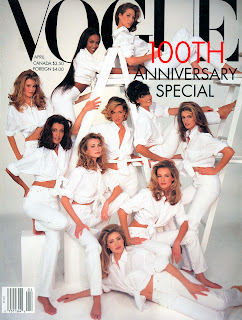 Posted by Neill Seeto at 5:31 PM 2 comments: Links to this post


Posted by Neill Seeto at 8:40 PM 2 comments: Links to this post

A true test of a model's skill is her ability to portray and embody a wide range of emotions and looks. I'll admit that I had at one point categorised model Alessandra Ambrosio as being capable of a singular solitary trademark Victoria's Secret sexy look. The following images from an upcoming editorial for LOVE Magazine, blow my assumptions completely out of the water. The editorial lensed by Boo George captures Ambrosio at her most beautiful, without relying on the model's obvious physical attributes and instead allowing her to display an intensity and character that delivers true editorial punch. Ambrosio loses herself in the character role of naval officer and in turn finds a newly converted fan in me. 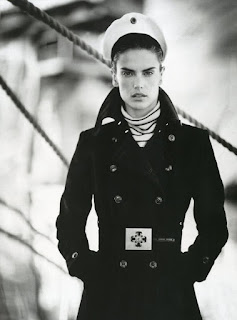 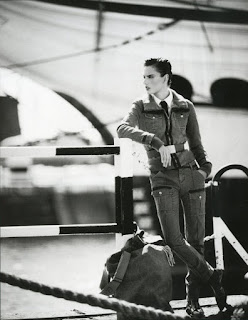 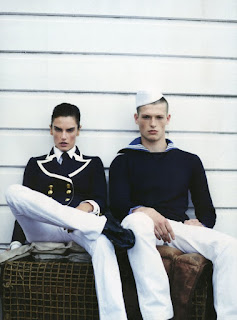 Posted by Neill Seeto at 10:00 AM No comments: Links to this post

Estonian born Karmen Pedaru began modelling in 2005 after being scouted whilst at a theatre performance in her hometown of Tallinn. Pedaru was formerly an elite athlete competing for the Estonian national soccer team prior to being discovered. Pedaru has since hung up her soccer training boots for the equally rigorous runway circuit where she is now a permanent fixture. Pedaru's modelling career has been gradually building momentum and following more than six years in the industry, is set to hit overdrive. Pedaru is a firm favourite with Paris Vogue and British Vogue, and recently landed her first Vogue covers for the Portuguese and Greek editions of the publication. Pedaru also starred recently alongside Joan Smalls in Gucci's Spring/Summer 2011 campaign lensed by Mert Alas & Marcus Piggott and appears in the current Fall/Winter 2011 campaign for Michael Kors shot by Mario Testino.

As a former athlete, Karmen compares her career to sport; stating that, "Modelling is kind of like a sport. You need a lot of endurance and focus." In an interview with Michal Figurski for reserved-fashion.blogspot, Pedaru elaborates "In this business you can't afford to be tired. It's really hard work. I fly about three times a week, yesterday I was in NYC, today I'm in Poland, tomorrow I'm flying to Paris. If I don't keep my energy and enthusiasm, I'll drop out. There's no work for tired models." Pedaru's sporting background puts her in good stead, "I played as a goal keeper for 6 years. I was well-built back then. You can still see my muscles here and there. I'm still quite fit, I play basket ball and roller skate."

As one of the most industrious and down-to-earth models in the industry, I am delighted to see Pedaru's strong work ethic paying dividends. Represented by Ford Models in New York, this statuesque 178 cm tall, olive green eyed beauty remains grounded in spite of her success. In the same interview for reserved-fashion.blogspot, Figurski poses the question; "Does being beautiful make life easier?", to which Pedaru replies, "It's a question of personality. If you're beautiful on the inside, then yes. Being beautiful only on the outside, you're nobody. I sense such people at first glance. There are many people like this in every business."

Posted by Neill Seeto at 9:10 AM No comments: Links to this post