You know some of the crazy stuff that Tyra Banks has her posse of wannabe models doing on ANTM shoots such as posing with snakes, bugs and all manner of wildlife? Well, it actually really does transpire from time to time in the real world of modelling. One of my all-time favourite editorials is from US Harpers Bazaar's May 1999 issue featuring the exquisite French model Aurelie Claudel and a Noah's Ark of the animal kingdom. Lensed by photographer Wayne Maser, Claudel stars alongside a cast of wild things including an elephant, a giraffe, pythons, lions, an ostrich and rhinoceros. Claudel unleashes the beast within whilst maintaining her model composure alongside these magnificent creatures. 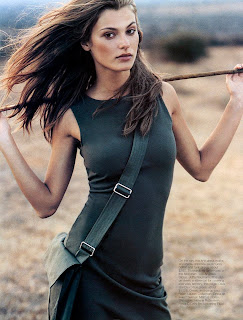 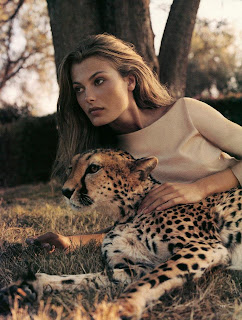 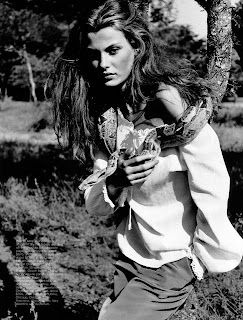 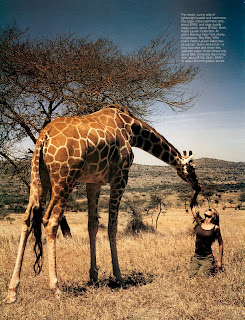 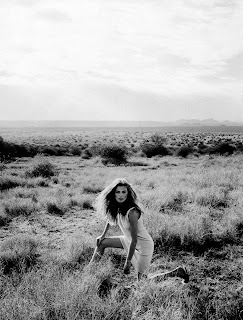 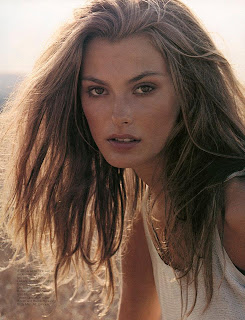 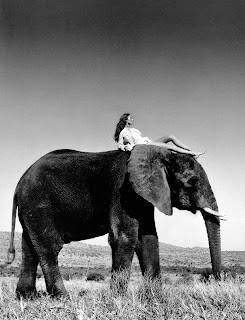 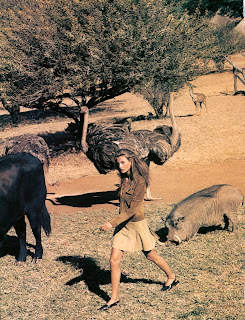 Posted by Neill Seeto at 10:07 AM No comments: Links to this post

Vogue Italia brings out the closet home shopper in us all with a satirical tongue-in-cheek editorial for the January 2012 issue featuring a cast of established models. Steven Meisel shoots Joan Smalls, Sigrid Agren, Natasha Poly, Daria Strokous, Caroline Trentini, Karlie Kloss and Gertrud Hegelund in the Spring/Summer 2012 collections from Gucci, Alexander McQueen, Balenciaga, Versace and others. The juxtaposition of the screen blurbs, the plastic fantastic QVC presenters and the straight off the runway garments injects this editorial with a dose humour that is so bad it's good.


Posted by Neill Seeto at 8:36 AM No comments: Links to this post

Balenciaga taps into the very essence of the teen model with its Spring/Summer 2012 campaign starring four relatively new faces. Photographed by model maker Steven Meisel, the campaign features newcomers Juliane Grüner and Laura Kampman alongside fifteen year old unknowns Rosie Tapner and Kirsten Liljegren. The campaign features the models sporting unkempt tresses, chillaxing in what could be mistaken for a shared model apartment. Liljegren hails from Denmark and is represented by mother agency Scoop Models whilst British native Tapner is on board with Ford Model Management in New York. The Balenciaga gig marks the first blue chip booking for both Tapner and Liljegren with a major fashion house and a major photographer.


Posted by Neill Seeto at 1:31 AM No comments: Links to this post

One of the aspects that I enjoy most about compiling this blog is that I get the chance to profile models whose work I admire and that perhaps have been overlooked in the fashion industry. Twenty-three year old Dutch model Marloes Horst is a perfect case in point. Originally discovered in 2007, Horst was catapulted into the modelling's major league when she was cast in the Spring/Summer 2009 Prada show alongside a slew of Dutch models including Bette Franke, Ymre Stiekema, Cato Van Ee and Lara Stone. A deluge of bookings followed including campaigns for Valentino fragrance, Sportmax Code, Iceberg, and editorial appearances in Dazed & Confused, V magazine, Vogue Russia, and the Italian editions of Elle, Flair, Amica, and Marie Claire.
Horst's classic blue-eyed, blonde, bombshell looks and va-va-voom physique should have played to her advantage but instead she found herself reluctantly cast in the ilk of a commercial model, more suited to lingerie and swimsuit clients. The buzz surrounding Horst gradually dissipated and she was no longer as sought after on the international show circuit nor for high fashion editorial work. Realising that Horst's modelling options had stalled, her management team at Next Models went into overdrive to strategically reposition the budding model on the market by paring back her bookings and through careful selection of the types of jobs that she would take on.

The past twelve months have played witness to Horst displaying a stunning versatility in editorials for a diverse range of publications including W, Intermission, Muse, French Revue de Modes, Dazed & Confused, Allure, US Glamour, and the Australian, Mexican and Spanish editions of Vogue. Don't get me wrong, Horst is still capable of donning a swimsuit with her trademark sex appeal, the difference now though is that she does so with a high fashion slant. In an interview with digitaldiamonds.de Horst reveals that, "The agency always tells what kind of jobs I'm on option for and they advise me. You talk about what way you and your agency want to present and push you. Every model has her own road to take."  With lucrative bookings for the likes of Victoria's Secret, Pirelli Calendar, Calvin Klein Swimwear and Sisley, Horst is well and truly back in the winner's circle.


Posted by Neill Seeto at 5:08 PM 9 comments: Links to this post

All In Her Strijd

Sixteen year old Dutch model Romee Strijd is being touted as the next big thing following an impressive debut at the Spring/Summer 2012 collections. The DNA model left all in her wake with an exclusive show list which included Nina Ricci, Yves Saint Laurent, Louis Vuitton, Balmain, Celine, Hakaan, Alexander McQueen, Prada, Jil Sander and Burberry Prorsum. The 178 cm willowy newcomer appeared in a total of 16 shows and was recently listed by COACD and style.com as one of the Top Ten Newcomers for the Spring/Summer 2012 season.
Blessed with golden flaxen hair, bee stung lips and an immaculate complexion, it is Strijd's impeccable runway swagger which has industry pundits in a spin. With editorial appearances in British Vogue lensed by Daniel Jackson and Paolo Roversi as well as a slated appearance in Love shot by Solve Sundsbø, all signs are pointing towards Strijd becoming one of the defining models of the next generation. Strijd recently appeared at the Calvin Klein Pre-Fall presentation and looks set to implode during her first New York Fashion week come February.

Posted by Neill Seeto at 9:15 AM No comments: Links to this post

At age twenty-one, Anais Pouliot is already a modelling veteran having been discovered when she was only fourteen. Pouliot initially began modelling locally in Montreal and in 2007, at age sixteen, signed to New York agency Trump Model Management to further her modelling career. Realising the potential of their young protegé, Trump Model Management took their time to develop Pouliot before unleashing the model at the Fall/Winter 2010 collections where she walked in a number of shows in New York and London before landing a Miu Miu exclusive in Paris.

Pouliot's voluptuous pout, coquettish looks and curvaceous body are clearly distinguishable however it has only been on the past year that she has truly been able to make the most of those attributes. At the Spring/Summer 2011 collections, Pouliot's sophisticated presence made her the darling of the Milan and Paris shows where she walked for the likes of Prada, D&G, Marni, Versus, Missoni, Loewe, Nina Ricci, Yves Saint Laurent and Chanel. Pouliot's appeal on the runway has since translated into major campaign traction with appearances in the Fall/Winter 2011 Louis Vuitton, Nina Ricci and Sonia Rykiel campaigns.
American Vogue, Interview, Intermission, Numéro, German Vogue and French Revue de Modes all seem to agree, having recently featured Pouliot in decidedly more risqué editorials. I have to admit that it has only been in recent times that I have come to appreciate Pouliot's overall look and appeal. Or maybe perhaps, I felt uncomfortable seeing her portrayed from such an early age in such an adult light. No doubt Pouliot's brooding, sultry looks and natural feminine allure will only intensify as she grows and matures into a fully-fledged woman.

Posted by Neill Seeto at 11:49 PM No comments: Links to this post