Santa Fe native Arizona Muse is the latest in an illustrious line-up of beauties to be selected to represent the cosmetics legend Estée Lauder. Twenty-three year old Muse joins supermodels Carolyn Murphy, Hilary Rhoda, Liu Wen, Joan Smalls and Constance Jablonski in bringing a more diverse representation of beauty to the Estée Lauder Empire. For Muse, the Estée Lauder contract and accompanying fanfare is especially sweet given her unconventional route to the top of modelling's ladder. Muse made her first forays into modelling in 2008 with moderate success appearing in publications including Allure, French Revue de Modes and Italian Glamour. In 2009, Muse disappeared altogether from the modelling game to give birth to her son Nikko and to focus on motherhood. Following the demise of her relationship in 2010, Muse made the decision to return to modelling with the intent of building a solid foundation and future for herself and Nikko.

Signed to Next Models Management, Muse's breakthrough moment came during the Spring/Summer 2011 collections in New York when she was selected by casting director Russell Marsh to open and close for BCBG Max Azria. Marsh recollects his first impressions of Muse in an interview with British Vogue, "She has this Midwest beauty I haven't seen for a long time. But it was also about the brows and the hair, that blunt bob, which is very natural, it suits the shape of her face. She has something reminiscent of the girls of the late Eighties and early Nineties." Marsh's endorsement had a trickle through effect with ensuing appearances at Altuzarra, Marc Jacobs, Proenza Schouler, Balenciaga, Louis Vuitton, and opening and closing slots at Prada during the Spring/Summer 2011 season.
Muse's trajectory since her return to modelling has been nothing short of startling, with cover appearances for Dazed & Confused, Numéro, and the Italian, British, Korean, Australian and French editions of Vogue. Muse is regular editorial presence in the US Vogue, French and British editions of Vogue working with industry legends Steven Meisel, Patrick Demarchelier, Peter Lindbergh, Mario Testino, and Inez Van Lamsweerde & Vinoodh Matadin to produce a compelling body of work. Muse has even garnered praise from US Vogue Editor-in-Chief Anna Wintour, "When I look at Arizona, I see shades of Linda Evangelista and Natalia Vodianova, but most of all I see her, a gorgeous, smart grown up. And how could anyone resist someone with that name." British Vogue's fashion director Lucinda Chambers hits the nail right on the head with her astute observation of Muse, "She is very versatile; womanly but androgynous and cool. And the wide-apart eyes and large mouth are quirky enough to be interesting but regular enough to mean she is a real beauty."


With industry heavy weights singing her praises, it's no wonder Muse has raked in campaign gold as the face for Yves Saint Laurent, Prada, Isabel Marant, Fendi, Chloé, Jil Sander, and Alberta Ferretti amongst others. It is Muse's appointment however as a spokesperson for Estée Lauder which cements her status as a model who will be remembered long after the images fade. Style and Image Director of Estee Lauder, Aerin Lauder concurs, "She has the timeless elegance that will make her a fashion and beauty icon of her generation. I am thrilled to welcome Arizona into the Estée Lauder family." Muse keeps it real though when speaking with British Vogue, "I don't know what's next for me but all feels good. I really have to stay focused and think this is my chance to build a solid foundation for me and my family, as it will change my life, it really will."

Posted by Neill Seeto at 11:53 AM No comments: Links to this post

One of my favourite models from the nineties Carolyn Murphy appears in the April 2012 edition of Turkish Harpers Bazaar displaying the star quality that has seen her enjoy a prolific modelling career spanning more than a decade. Thirty-six year old Murphy's classic blond-haired, blue-eyed look and uncanny knack of imbuing any outfit or editorial with an air of elegance has drawn numerous comparisons to style icon Grace Kelly thoughout her tenure as one of the most sought after models of her generation. Whether it be on the cover of American Vogue, Sports Illustrated, and the latest Royalty issue of i-D or as a face for Estée Lauder cosmetics, Murphy exudes an effortless grace and versatility that is relatable, accessible and instantly recognisable. In spite of her obvious physical charms, Murphy's most attractive feature is her humility as revealed when asked by Francesca Sorrenti in an interview for models.com, "When you are called a supermodel, how do you feel?" Murphy replies without a hint of pretence, "I roll my eyes!! I think it takes a whole team to create a model's career. The photographer, hair and make-up artists, stylists and your agent (IMG), they are the building blocks to a successful career." 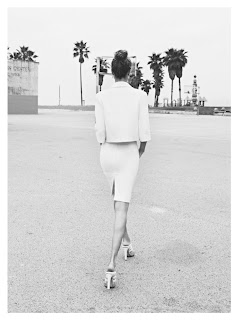 Posted by Neill Seeto at 11:46 PM No comments: Links to this post

Designer Hedi Slimane may have been appointed to fill Stefano Pilati's shoes as the new creative director at Yves Saint Laurent earlier this month, however it's Slimane's recent photographic work that has my full attention. Slimane creates pure magic with two of modelling's stand out faces Fei Fei Sun and Liu Wen for the March 2012 edition of Chinese Vogue. Slimane captures the sensual and quietly imposing beauty of Sun and Wen for the exquisite portfolio of black and white images. China's two brightest modelling exports look serenely beautiful as Slimane plays with the contrast between the model's porcelain perfect skin and the black and shimmering silver ensembles selected by stylist Mika Mizutani. Slimane has been steadily building his profile as a photographer with a spate of recent editorial features for i-D, Dazed & Confused, V Magazine, and the French, Russian, Japanese and Chinese editions of Vogue. It's early days yet but this editorial gets my vote for one of the most visually captivating editorials for 2012.

Posted by Neill Seeto at 10:37 PM No comments: Links to this post

When the divine Constance Jablonski first emerged on the international runway circuit in 2008, I had reservations that her incredulous in your face beauty would hinder her long-term modelling prospects. In an industry where pretty newcomers are a dime a dozen, versatility, a point of interest and strategic management make the difference between runway filler and models with true staying power. Discovered at the Elite Model Look of the Year competition in 2006, Jablonski signed with Marilyn Model Management in New York before debuting at the Spring/Summer 2009 collections where she was an instant hit walking for BCBG Max Azria, Donna Karan, Lanvin and Louis Vuitton amongst others. Within a year Jablonski was able to keep the momentum going by notching up an unprecedented 72 show tally at the Spring/Summer 2010 collections to consolidate her status as one of the most buzzed about newcomers.

A lot has transpired in the four-and-a-half years since Jablonski made the move from her home town in Lille, France to the bright lights of New York City. Twenty-two year old Jablonski has posed for a diverse array of publications including virtually every international edition of Vogue, American Harpers Bazaar, Love, W, Pop, V, Purple, Another Magazine, i-D and Russh. Of greater significance though is Jablonski's undisputed status as a model with campaign clout. Blue chip campaigns for Dolce & Gabbana, Sonia Rykiel, Bally, Hermés, Donna Karan, ck by Calvin Klein, not to mention a lucrative contract with Estée Lauder cosmetics, confirm her as one of the key players amongst  the current generation of top models.


Jablonski's popularity shows no signs of waning with editorial appearances in French Numéro, Allure, Russian Harpers Bazaar and the Italian, Japanese and Latino American editions of Vogue in 2012 alone. That coupled with Spring/Summer 2012 campaigns for H&M, Theyskens Theory, John Galliano and Jean Paul Gaultier as well as consecutive appearances in the Victoria's Secret Fashion Show, have kept Jablonski firmly amongst modelling's elite. Jablonski's success is a testament to her considerable modelling chops and to Marilyn Model Management's clever positioning of the classic French beauty in the market as a versatile model with global reach.

Posted by Neill Seeto at 11:15 PM No comments: Links to this post

Iconic Supermodel Claudia Schiffer returns to the role that catapulted her to fame in 1989 as a young nineteen year old up-and-coming model. Schiffer reprises her role as spokesperson and model for Guess to commemorate the clothing company's 30th Anniversary. Starring in the sultry black and white images shot by Ellen Von Unwerth - the photographer who lensed the original Guess campaigns during the late Eighties, Schiffer looks as though she hasn't aged a day in her role as the kittenish and brazen Brigitte Bardot. Speaking to American Vogue of the original 1989 Guess campaign, Schiffer acknowledges "That's  really when it all happened - with those pictures, I looked wild and sexy, which was so exciting. A lot of people said that I reminded them of Brigitte Bardot, and at first I didn't like it, because I thought, I don't want to be compared to someone else, because then who am I? Later, I realised it was wonderful to be compared to an icon."
Schiffer could not possibly have realised at the time that the Guess campaign and the endless comparisons to Bardot, would launch a modelling career which in its 23 year span, would include sixteen American Vogue covers, campaigns for Revlon and L'Oréal, a role as muse to Karl Lagerfeld and numerous campaigns for the likes of Chanel, Versace, Escada, Valentino and Louis Vuitton. Speaking with WWD, Schiffer shows gratitude in coming full circle, "Guess will always have a soft spot in my heart, and I'm excited that 23 years later we can still work together so successfully."


Posted by Neill Seeto at 7:37 AM No comments: Links to this post

Down But Not Out

Pauline Haorau may have taken one hell of a tumble at Anthony Vaccarello during the Fall/Winter 2012 shows, however she managed to regain her composure with the assistance of veteran models Suvi Koponen and Daria Strokous who came to her aid, escorting the newcomer down the remaining runway. Hailing from Reunion Island, Haorau was discovered recently via the 2011 Elite Model Look of the Year contest, where she placed amongst the top seven finalists. The statuesque 180 cm tall curly-haired beauty wasted no time in making her international runway debut during the Paris collections appearing in a total of twelve shows including Miu Miu, Loewe, Rochas, Alexis Mabille, Roland Mouret and Louis Vuitton. Seventeen year old Haorau possesses a beauty that is simply astonishing. Not since Christy Turlington, have I seen a model with such an exquisitely shaped face framed by dreamy olive green eyes with hues of gold. Signed with Elite Model Management in Paris, you can expect Haorau to land firmly on her feet at the Spring/Summer 2013 collections in September.


Posted by Neill Seeto at 10:44 PM No comments: Links to this post